$2 trillion coronavirus deal: Who will get stimulus checks and when?

$2 trillion coronavirus deal: Who will get stimulus checks and when?

Under the current plan, most adults would get a one-time direct payment of $1,200. But it may take longer than a couple weeks to get your money.

WASHINGTON — The White House and Senate leaders agreed early Wednesday on a $2 trillion economic rescue package, the largest in the country’s history.

The bill comes in response to the viral pandemic that has shut down businesses and crippled economies around the globe. It would give direct payments to most Americans, expand unemployment benefits and provide direct grants and loans to businesses and hospitals.

The massive measure is the third coronavirus response bill produced by Congress and by far the largest.

The Republican-controlled Senate must still approve the bill before sending it to the Democratic-controlled House, so final details could change. Passage in the Senate was expected later Wednesday.

Who gets stimulus checks?

The bill, in the form circulating among lawmakers on Wednesday, would provide one-time direct payments to Americans of $1,200 per individual adults and $2,400 for married couples and an additional $500 for each eligible child. 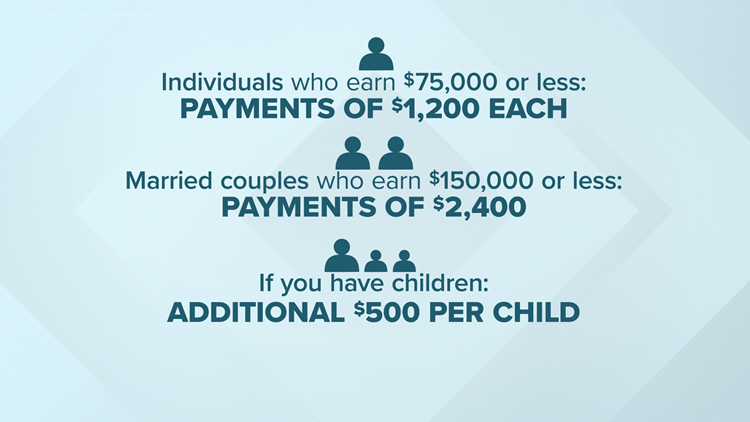 When will stimulus checks go out?

Senate Minority Leader Chuck Schumer said Wednesday that President Donald Trump wants to send the payments to people in less than two weeks, by April 6. But experts agree that could be a hard deadline to hit.

Democratic aides in the Senate told the New York Times that those with direct-deposit info on file with the IRS should see payments within a few weeks of the bill becoming law. However, if the IRS doesn’t have that info, people may need to wait a lot longer to get a check. Aides told the Times it could be up to four months for a physical check to arrive.

The Tax Policy Center noted in 2008 there was a gap of about three months between passage of the stimulus legislation and the start-up of payments. Additionally, the IRS had worked for three months before enactment of advance payments of tax rate reductions in 2001 and child tax credits in 2003. 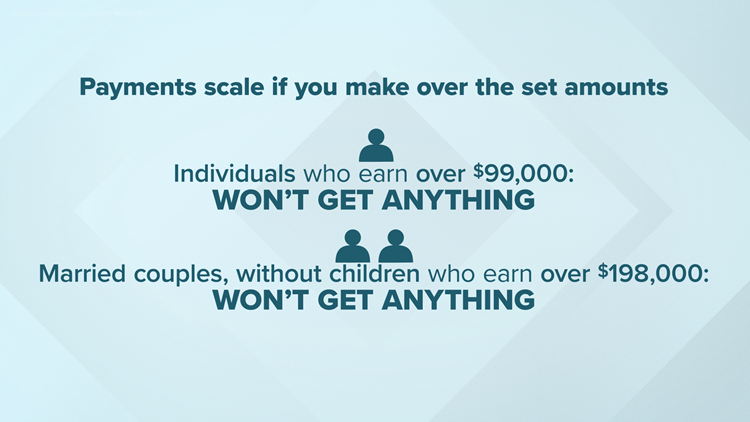 What will furloughed workers get?

Furloughed or unemployed workers would get whatever amount a state usually provides for unemployment, plus a $600 per week add-on, with gig workers like Uber drivers covered for the first time.

Democrats said the package would help replace the salaries of furloughed workers for four months, rather than the three months first proposed.

The bill provides $562 million to ensure that the Small Business Association has the resources to provide Economic Injury Disaster Loans (EIDL) to businesses that need financial support during this difficult time. These loans will help businesses keep their doors open and pay their employees. SBA has signed emergency declarations for all 50 states, the District of Columbia, Puerto Rico, and the U.S. Virgin Islands, so the EIDL program will be available to assist small businesses across the country that have been adversely impacted by COVID-19.

This funding is in addition to the significant assistance provided in the Keeping American Workers Employed and Paid Act, which authorizes $350 billion worth of 100 percent guaranteed SBA loans, a portion of which SBA will forgive based on allowable expenses for the borrower.

This small business package also includes $10 billion in direct grants for businesses that do not qualify for the EIDL program and $17 billion to have SBA step in and make six months of principle and interest payments for all SBA backed business loans. All these measures combined will relieve financial stress from struggling businesses and inject much-needed capital into the economy.

Establishes a new, much more generous unemployment benefit by adding $600 per week to normal state benefits for up to four months and provides an additional 13 weeks of benefits to 39 weeks of regular unemployment insurance through the end of 2020 if someone is sidelined by the outbreak. The coverage would be retroactive to Jan. 27. Extends coverage to “gig” workers and independent contractors.

The bill includes an additional $242 billion in additional emergency appropriations to fight the virus and shore up for safety net programs. That includes money for food stamps, child nutrition, hospitals, the Centers for Disease Control and public health and transportation agencies. The figure has gone significantly higher during talks over the weekend.

The measure includes $15.6 billion to augment the food stamp program, which helps feed around 40 million Low-income people per year. Its annual budget is around $70 billion. A bipartisan package is likely to provide far more.

The initial GOP plan called for $208 billion in loans to larger businesses like airlines, which would have to be repaid, and a subsequent; a version released over the weekend called for $500 billion. Leaders are still negotiating the final number and how the money would be provided by the administration and safeguards to prevent abuses. Delays payroll tax payments by employers. They would be able to defer payment of their 2020 payroll taxes until 2021 and 2022.

Republicans and the administration have resisted demands by Democrats and governors for aid to the states, whose governors have requested $150 billion to shore up budgets strained by large new costs and plummeting tax revenues. Negotiations are likely to produce a compromise.

Loans and guarantees to businesses, state and local governments: $500 billion. Includes up to $50 billion for passenger airlines, $8 billion for cargo carriers, $17 billion for “businesses critical to maintaining national security.” Companies accepting loans may not repurchase outstanding stock; must maintain their employment levels as of March 13, 2020 “to the extent practicable”; and bar raises for two years to executives earning over $425,000 annually.

Includes $350 billion. For companies with 500 employees or fewer, loans that may be forgiven if company retains workers; $17 billion to help small businesses repay existing loans; $10 billion for grants up to $10,000 for small businesses to pay operating costs.

The bill says grants are exclusively to pay employee wages, salaries and benefits based on how much the airline spent on them from April through September of last year. Loans would carry conditions, including bans on companies buying back their own stock or paying dividends. Airlines would have to avoid layoffs “to the extent practicable,” and would be required to keep at least 90% of current employment levels.

The White House and Senate Republicans had initially balked at grants. Robert Mann, an aviation consultant and former airline executive in New York, called the final deal “an initial victory for airlines.” He cautioned, however, that airlines face months of battling the virus-related downturn in travel before they can recover.

$31 billion. Includes $13.5 billion for states to distribute to local schools and programs, $14 billion to help universities and colleges.

$27 billion for research and development of vaccines and treatments, stockpiling medical supplies.

$2 billion for health care, equipment schools and other needs.

$1.1 billion, including $324 million to evacuate Americans and diplomats overseas; $350 million to help refugees; $258 million in international disaster aid; $88 million for the Peace Corps to evacuate its volunteers abroad.

$150 million for federal grants to state and local arts and humanities programs; $75 million for Corporation for Public Broadcasting; $25 million for Washington, D.C., Kennedy Center for the Performing Arts.

What you can and can’t do under Denver, Boulder’s…